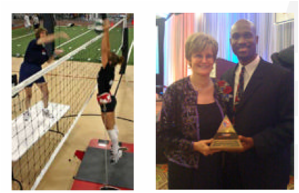 Michael Denardo and Adrianna Dollar bring an element expertise from the collegiate coaching and playing ranks, in addition to the training aspect of the athlete and the important life lessons learned by experienced trainers. They are both lead clinicians with Nelson's College-bound Coaches Network camps/clinic and Talent Showcases.

Thanks to all for being part of the movement to continue the Nelson Mission of having FUN, working hard and improving to the best of your ability. We welcome all of you in our programs, and i know each and ever player and parent will not only see the improvement of their athlete and appreciate of their passion and love for the sport.

Volleyball Training Fee:  Each individual will have different pricing for their training. Once you have completed the information form, we will send you the rates available for our trainers.  Level 1-5 Instructors: Private range from $75-$200 per hour; Group (4 or more)  will range between  $25-$100 per hour per player (indoor prices includes court costs at Net Results). Sand training may vary due to sand court rental.

Adriana Dollar, former UT-Arlington volleyball player, joined the Tejas Volleyball coaching staff for the 2011-2012 club season. Adriana was the captain of the 1989 UT-Arlington team that made it to the NCAA Division I Final Four in Honolulu, Hawaii. In addition to an illustrious playing career, Adriana has been the Head Varsity Coach at Ursuline Academy and Nolan High School. She has also coached club volleyball for Texas Advantage, Team North Texas, Metroplex Juniors, and Integrity. A native of Uruguay, Adriana started playing volleyball at a very young age. Through her playing career in Uruguay, Adriana competed in 10+ National Championships, traveled all over Argentina and Brazil playing, and was even the first female allowed to play in the Men's Uruguayan Sand Volleyball Championships as the setter for the National Champion team! When Adriana moved to the United States she played volleyball at Grapevine High School before earning a scholarship to play at UT-Arlington. After her college playing career, Adriana played on the Mexican Professional Sand League. All together, Adriana has over 27 years of playing and coaching experience! Adriana has a passion for the game of volleyball that is very evident when you see her work. She enjoys training young athletes and inspiring them to have the same love for the game that she has. She is an excellent teacher of the fundamentals of volleyball and providing a solid skill foundation for younger athletes.

A “passionate coach and player” who has done it all in the pursuit of the development of the sport.

Complete the form below to schedule Adrianna Dollar for indoor and outdoor training.